This past Tuesday, American Gaming Association (AGA) president and CEO Bill Miller addressed attendees at the first-ever Global Gaming Expo (G2E). In his address, Miller spoke about how the global gaming industry is performing at levels never seen before. Additionally, the American public perception about the casino gaming industry has shifted. Now nearly half of all Americans think of it favorably. This, according to the AGA, is an all-time high.

These figures, along with others were released in a report by the industry trade group at the Expo. It also found that not only do 49% of US adults find the casino industry favorable, they also plan to gamble at a casino over the next year. This figure is up from 45% recorded in 2018. This means that 124 million people plan to visit a USA casino in the next 12 month – a 20 million increase. 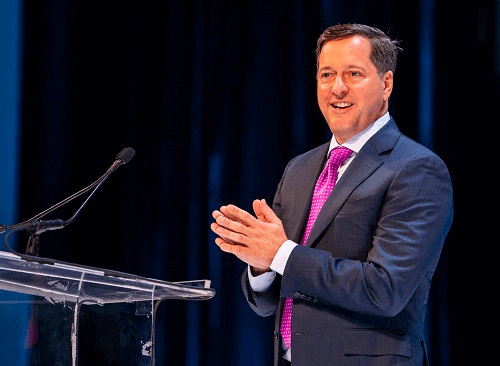 The increase in these figures coincides with the industry reporting record revenues. For example, tribal and commercial casinos have US$75.4 million in revenue. This adds US$261 million to the economy. The AGA president acknowledges the growth. “The state of the gaming industry has never been stronger,” he said at the G2E. “It’s never been more popular with the general public, and it’s never offered more exciting technology and entertainment offerings.”

Along with announcing the gaming industry’s boon, AGA president Miller set out the top three priorities for the AGA.

For the upcoming year, the AGA will be focusing on three key points of concern. Firstly, the AGA president wants to get sports betting done right. The repealing of the Professional and Amateur Sports Protection Act of 1992 (PASPA) offers the gaming industry new customers. Furthermore, Miller noted that it has connected gaming companies with new partners and technologies.

“We’re going to make sports betting a showcase of our industry’s commitment to responsible gaming,” he said. He further noted that the organization is going to study the impact of sports betting on health, create advertising standards, and strengthen enforcement to get rid of bad actors.

Secondly, the AGA president said the trade association wants to turn its public support into political influence. Miller said that its time political leaders adopt the positive outlook the American public has. “While their constituents see the impact we deliver, many in Congress remain mired in outdated stereotypes. Our intent is to chance that,” he said.

And thirdly, the AGA is looking to modernize the way they do business. Casinos are fertile ground for innovative gaming and entertainment technology, Miller said. However, he added, the industry still insists on using antiquated cash-only systems. A casino experience should be seamless for the customer. “Every one of you came here somehow,” the AGA president said. “If you took an Uber, it was digital. You stayed in a hotel, you put down a card. You went to a restaurant last night…it was a digital transaction. Our customers are used to this. They will demand it of us.”

In closing his address, the AGA president said “We’re here to help. We intent to be helpful.”