Proposals on the Table for the New Waukegan Casino

Proposals for the new casino in Waukegan, Illinois have been submitted. This comes after the announcement of the development of a new casino in the city earlier this year by governor J.B. Pritzker. The development in Waukegan is among six locations in the state to receive new casino licences. Other locations include Danville, Chicago, southern Cook County, Rockford, and Williamson County. However, consultants recently announced they doubt that there will be one in Chicago.

The city of Waukegan received six formal applications but two bidders are in ties together so the state is officially looking at five. The site of the casino will be where the Fountain Square shopping currently is.

Developers that have filed proposals include the operators of the state’s most lucrative casino, a former state senator who has been linked to funding recent local elections. And a company that was expelled from Illinois’ last casino license race 10 years ago.

Waukegan officials said they will be narrowing down the list and presenting a maximum of three proposals to the Illinois Gaming Board by the end of October. The successful developer will have to fork over $15 million upfront for the license. 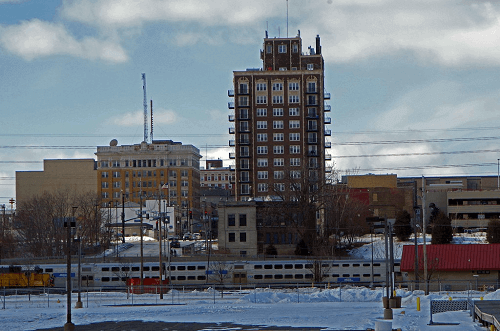 The gambling giant Churchill Downs from Louisville, Kentucky already owns Rivers Casino in Des Plaines in partnership with Rush Street Gaming, owned by casino magnate Neil Bluhm. The conglomerates want to expand their Rivers Casino brand to Waukegan. Furthermore, they claim that they can do this without risking the $400 million the casino makes in annual profit revenue just 40 minutes away. In their 50-page proposal, Churchill Downs-Rush Street wants to set up a 1,625-gaming arena and they claim their development will create 1,200 permanent jobs. They also want to add a sportsbook, poker room, and a Lux bar which is an “upscale gastropub” that’s part of Gibsons Restaurant Group. Furthermore, they say Rivers Casino Waukegan will bring $150 million annually into the local economy.

Based in Las Vegas, Full House is looking to add this city to its list of five casinos it operates in four states that are known as American Place. This company submitted a whopping 402-page proposal that propositions developing a 1,560-gaming venue complete with its own sportsbook, luxurious collection of villas, gourmet restaurant, and helicopter pad. It seems like American Place Waukegan will be a playground for the mega rich. Full House Resorts estimates that the 75,000-square-foot construction will cost between $275 million and $325 million. Furthermore, they estimate that American Place Waukegan will bring in $13 million a year to the area.

This company is run by former Grayslake state Sen. Michael Bond in partnership with Vegas-based Warner Gaming. The former senator is known for having contributed thousands of dollars through his video gambling company Tap Room Gaming into the recent Waukegan elections. The casino would be known as North Point Casino and it will feature the maximum 2,000 gaming positions. In their 241-page proposal, they don’t fully outline how much they will spend on procuring the Fountain Square property. Lakeside wants to build a 5,300-square-foot sportsbook, an outdoor amphitheatre, five restaurants, a hotel, ballroom conference center, and a retail entertainment district.

Based in Milwaukee, Potawatomi wants to expand and build a Waukegan Potawatomi Casino. They’re setting their sites on constructing a 130,000-square-foot casino with 1,850-gaming positions, a food court, and three restaurants. They’re also planning on collaborating with existing hotels in the area instead of building their own. In their 159-page proposal, they claim construction will cost $343 million. It will also create 2,599 jobs, and add $394 million into the local economy. Potawatomi claims if they get the go-ahead, they can open by December 2021.

This developer is run by real estate mogul Andrew Hochberg – who also has a stake in Bond’s Tap Room Gaming. Their 172-page proposal states they will build a 38-acre casino complex. It will have 1,380 games, two bars, several restaurants, a scaled replica of a famous Italian fountain, and an outdoor event area. In their next phase of development, they want to add a dine-in cinema, luxury hotel, and a spa. They’ve offered the city $7 million for the property to develop the complex. Waukegan Development Associates claims that it will eventually create 1,000 jobs and pump nearly $145 million into the local economy.

For more US casino news, keep it locked here at BestCasinoSitesOnline.com.

Home » Proposals on the Table for the New Waukegan Casino